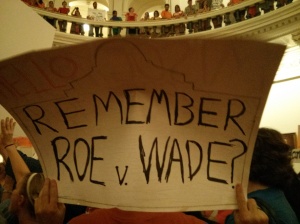 I arrived at the Capitol just before 8. A security guard told me I wasn’t allowed to bring my water in, which was ridiculous, because I could look into the rotunda and see people with water. But given the number of people already arrested for ridiculous things, I wasn’t about to push it.  I gave up my water, went through the metal detector, and went in.

(The irony that I could bring a gun into the Capitol but could not bring my own water is not lost on me. At least I didn’t need a tampon!) 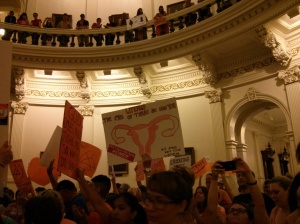 I spent just over four hours in the rotunda, chanting and screaming. Because some security guards were not being helpful, I decided to just stay on the first floor. Most of the time, we were all corralled in the middle of the room. There was a brief period where I joined a group marching and chanting around the outer circle, but eventually we were all herded back into the roped-off area.

I stayed until the final verdict was reached. I didn’t leave to try to find water, because there came a point that if I’d left the rotunda, I wouldn’t have been allowed back in. I didn’t go to the bathroom. I stayed after my throat was hoarse and my knees and ankles started to hurt.

And we lost. There’s not much more to say than that. I have spent today trying to synthesize things with more depth, but what it boils down to is this: Feminism is not dead. Activism is not dead. We came together. We fought. And too many of our elected officials are spiteful misogynists unwilling to listen.

And this isn’t over.

And I still love Texas. Because Texas is not the sum of its legislature. This state is so much more than that. Texas is full of brilliant, beautiful, creative, wonderful people. It is an incredible place. Texas enriches me. I love Texas, and I will fight for Texas women.

I am not giving up. I will not let bigots take away my agency and autonomy. I will fight for the state I love and the people I care about. Because this isn’t just about Texas. It’s about women all over the world. 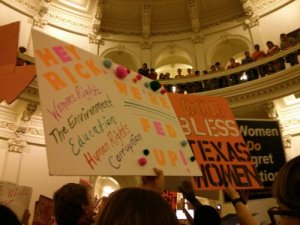 3 thoughts on “Feminist Every Day”