This weekend was theoretically a relaxing one. But it proved once again that I thrive on being busy.

Last week was frustrating for a couple of reasons, the main one being that my wonderful friend Reesa is back in the hospital. She’s been battling a recurrence of breast cancer for pretty much the entire year, and was hospitalized for pretty much the entire summer. Last week, she went back in with a blood clot in her lung, as well as a staph infection. There’s been a lot of worry. But on Friday, she was allowed to start getting visitors again, so Jon and I went over there after dinner, and spent several hours talking and laughing. It was a relief, after a week of worry, to just be able to see Reesa. She’s still sick, but getting to have a conversation with her really helped me relax. I can’t wait until she’s back home.

I had a relaxing Saturday morning, which consisted mostly of revising poetry, before going to lunch with members of the Austin Writergrrls, which is a writing group I belong to. We had some great conversation about creative work, day jobs, and life in general. I always feel encouraged and inspired after spending time with them.

After lunch, I went to my salon for a haircut and some new color. While I enjoyed the bleach blonde look, it was frying my hair. So I ended up with this: 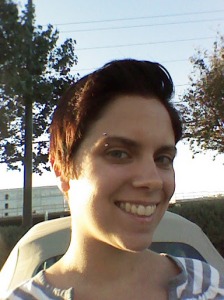 I love the way it came out, and I like the idea of changing my hair color to match the seasons. Good thing I have plenty of time to ponder a spring look.

After my haircut, I went home and began to put a Halloween costume together. I am usually really lazy and don’t bother with Halloween, but this year, Jon put together a Breaking Bad costume, and it was awesome: 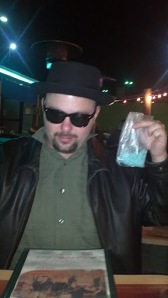 He even shaved his head to complete the look. I was only slightly traumatized. He looks good with a shaved head, actually. It just took some getting used to.

Anyway, I decided I actually wanted to dress up, so making liberal use of safety pins and tape, I finagled one of Jon’s suits to fit me. Sort of. Next year, I’ll start planning more than 4 hours in advance. Anyway, one suit and a hat later, I ended up as Don Draper, and together, Jon and I were AMC Original Programming. We also came in 9th place in trivia, which was awesome considering that we didn’t have any of our teammates with us (as they were off doing other Halloween things).

On Sunday morning, Jon made migas, we did errands, and I made a double batch of tomato sauce. Then I spent the afternoon at a small going-away gathering for one of my dance friends who is moving to Seattle. I’m going to miss him, but he’s keeping his rental property in Austin, meaning he’ll be back for visits and such.

After the party, I came home, made a delicious pizza, and spent the evening chilling out before turning in early. A great end to a great weekend.