To celebrate the beginning of Channukah, I made sourdough challah, as well as this slow-cooker brisket. I actually have another brisket recipe I love, but it doesn’t work well in the slow cooker, and since Channukah began during the busiest time of the week, it was easier for me to prepare something in the slow cooker before work to have ready when I came home. The challah came out great, and the brisket was absolutely perfect. 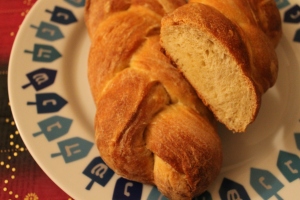 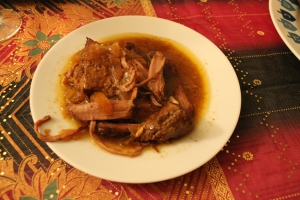 A few days later, I made a lamb soup for Solstice. I’m not pagan and thus don’t observe any of the spiritual aspects of this particular day, but I do like the symbolism. I hate the short days and long nights, and the fact that the days are gradually getting longer is definitely reason to celebrate! 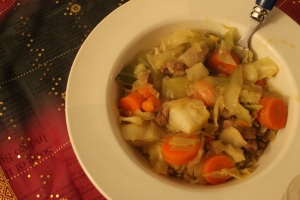 On Christmas Eve, we had latkes for dinner. I mean, Channukah was still going on, I had cooking plans for Christmas Day, and since latkes from scratch are time-consuming (but absolutely the best), we had to do it on a weekend. So Jon spent the better part of Saturday night making completely delicious latkes by hand, complete with applesauce and sour cream.

On Christmas Day, we went a little overboard, but it was completely worth it. We started the day late (well, Jon did; I’m a perpetual early riser and spend most of the morning working on poetry with a puppy cuddled in my lap) with a fantastic brunch. Jon prepared this sweet potato hash that is without a doubt one of the most delicious breakfast dishes I have ever tasted in my life. It did take a lot of prep work the night before, but was very easy the morning of, and completely worth all the effort. We cut the recipe in half, and we were full right up until dinner. 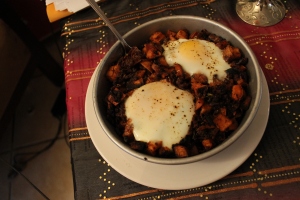 And on Christmas night, we had a lasagna, which took me well over three hours to prepare (but was totally worth it). This year (I do a different lasagna every Christmas, or at least I have for all the Christmases I have spent in Austin), I stuffed it with kalamata olives, roasted red peppers, and roasted artichokes. Unfortunately, the roasted artichokes didn’t turn out so great. This was my first time attempting to cook them, and my instructions weren’t very clear. Still, in mid-preparation I snapped a cool photo of an artichoke looking like a lotus. 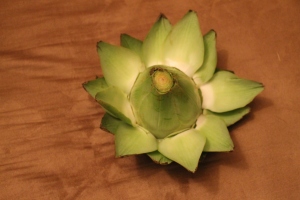 Despite my artichoke issues, the lasagna turned out delicious, and everyone had seconds (and in one case, thirds). 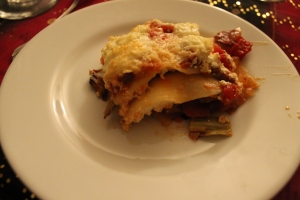 We spent Christmas with friends, drinking sake and playing board games (and cooing over Maxwell). It was a lovely end to a lovely cooking spree. And I look forward to reheating leftovers and not thinking about cooking for a few more days.